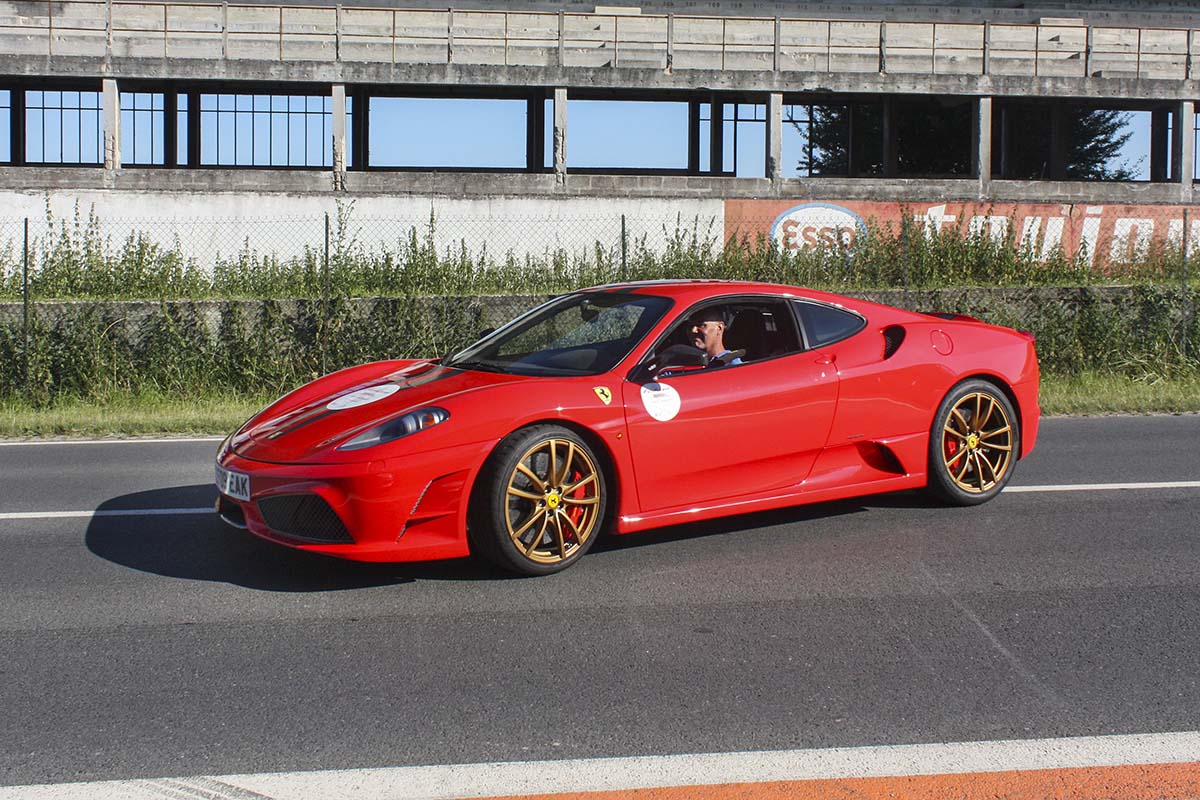 An early Sunday start began with a tour of the Foskers workshop and showroom, followed by a light breakfast, before embarking on their journey to the continent. A sight fit for a postcard, nine Ferrari tipo exited Foskers Brands Hatch and took to the Kent roads, likely awakening the majority of the county on their way to cross the channel. With route maps distributed and targa roofs tucked away, there was an overwhelming sense of impending adventure.

Leading the pack of Foskers clients was the 430 Scuderia, followed closely by the 328 GTB and 512 TR - both saving their limelight for the scenic French lanes to come. The first leg of the driving tour focused on the Champagne regions.

Turning heads through quiet villages all the way, the striking square at Arras’ centre welcomed in the procession. Having parked on the cobbled road, the group settled for some well earned lunch, before continuing southward towards Reims.

The procession’s next stop was at the once great Reims- Gueux race circuit. This relic of the golden age of 50s motor racing was first established in 1926 as an alternative venue for the Grand Prix de la Marne. Though now only a shell of its former glory, the remaining pit lane and stands were brought back to life as the Ferrari pulled in.

A thrilling journey through the picturesque Champagne wine region followed. Among the innumerable vineyards, some familiar names were spotted. Later at the hotel, the group were to experience a selection of the wines they had driven past, and discovered some hidden gems that rivalled the Champagne elite, who’s future vintages were growing in full view in the surrounding hills.

After sampling a couple the local vintage as the sun set, the drivers retired early to prepare for day two. 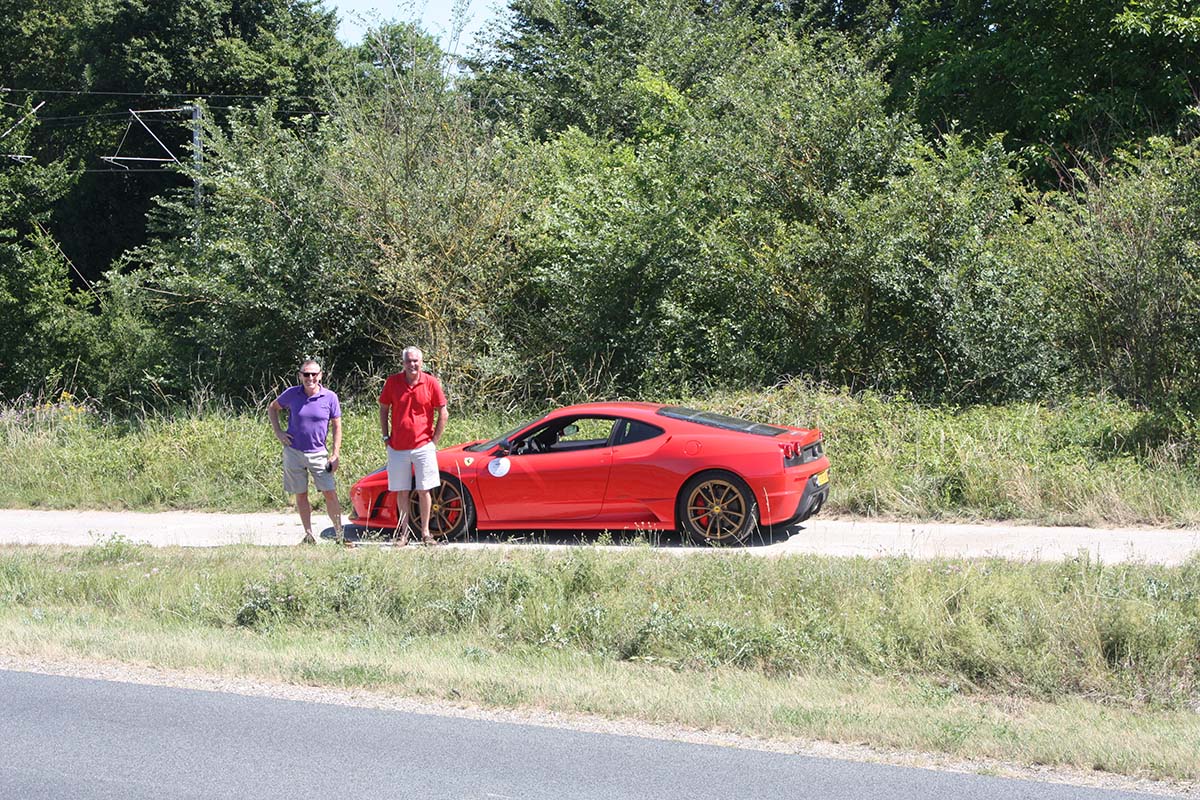 The second day began by heading further south towards Beaune and travelling through the region’s parkland, nature reserves, and hills.

The sound of nine Ferrari that had until now radiated outwards across miles of open farmland suddenly intensified as it reverberated around the ever-enclosing forest. Before long, the miles of angular, straight, flat roads began to change, giving way to rolling hills and miniature valleys. The crops changed too, as we drew ever closer to the famous Burgundy region, and the birthplace of the Puligny Montrachet vintage.

It was the 512 Testarossa that stole the show that day. Mirroring the angular and regimented vineyards with its similarly uniform bodywork, the TR provided a stark colour contrast of Rosso Corsa against the deep green crops.

As the second day’s driving drew to an end, the group settled into their hotel for the evening. Sampling the local gem, Puligny Montrachet, as the sun set on the miles of sprawling vineyards, all enjoyed the hospitable La Montrachet Hotel’s idyllic grounds. 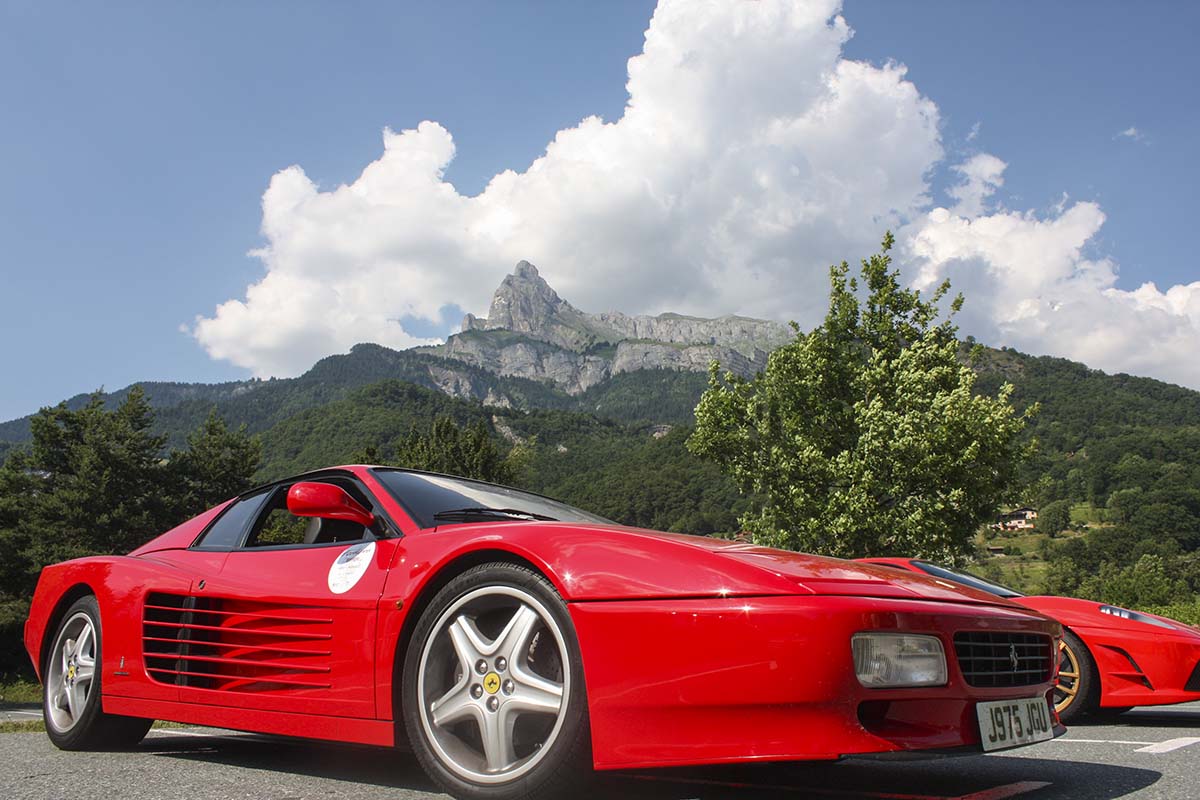 Day 3 and the tour left Montrachet in great anticipation of the mountainous alpine passes that lay ahead. On the approach to Jura Natural Park, the roads began to steadily climb, winding their way upwards with hairpin bends and excellent cambered corners. Beautiful scenery lined the way with dense tree lines and thick canopies opening up to sheer cliff-edge roads, before closing back in to further tunnels of dense mountainside forest.

The procession stopped for lunch in one of the many quiet, unassuming towns that line the rivers leading from Geneva’s Lakes. Once the dust had settled again on the mountain roads behind us, we pressed on towards Chamonix; the imposing Mont Blanc grew closer.

As the group pulled in, the alpine town of Chamonix was buzzing with life, catering perfectly to the multitude of adrenaline-seekers: hikers, cyclists, base jumpers (and Ferrari drivers) alike.

In one of the town’s welcoming restaurants, the group chatted excitedly about their vehicles and how each Ferrari had performed that day. They also discussed the next day’s planned journey into Italy, whilst enjoying regional dishes of veal and escargots, and carafes of Côtes-du-Rhône wine.

As most still slept, the group set off conspicuously out of Chamonix, and began traversing the incredible alpine passes that would lead the way to the next destination: Italy’s Lake Como. For mile upon mile Mont Blanc’s tunnels reverberated with a spectrum of engine tones, from the deep murmur of the 512 TR to the growl of the 430 Scuderia until, emerging suddenly, Italy’s mountains rose up on all sides to welcome the Ferrari back to their birthplace.

Drawing closer to Lake Como, the winding roads grew ever tighter and less populated, until, in true Italian fashion, little old Fiat 500’s, well-worn Lancia, and Vespa mopeds became the only other vehicles in sight. Before long the tour arrived at Lake Como’s CastaDiva hotel; we were welcomed by an empty forecourt, cleared and made ready earlier for our arrival. In a dazzling contrast of glacial blue water and fiery red, the Ferrari stood, with bodywork echoing the curves, points, edges, and natural beauty of the mountain scenery.

With the cars now basking in the sun the group was quick to follow suit: enjoying a drink on the terrace, a relax in the spa, or a dip in the lake’s irresistibly refreshing waters. Dinner was prepared, served, and enjoyed on the patio as the sun set on over the lake. As all reflected on the journey behind us, we anticipated the next leg down Italy’s foothills to Modena. 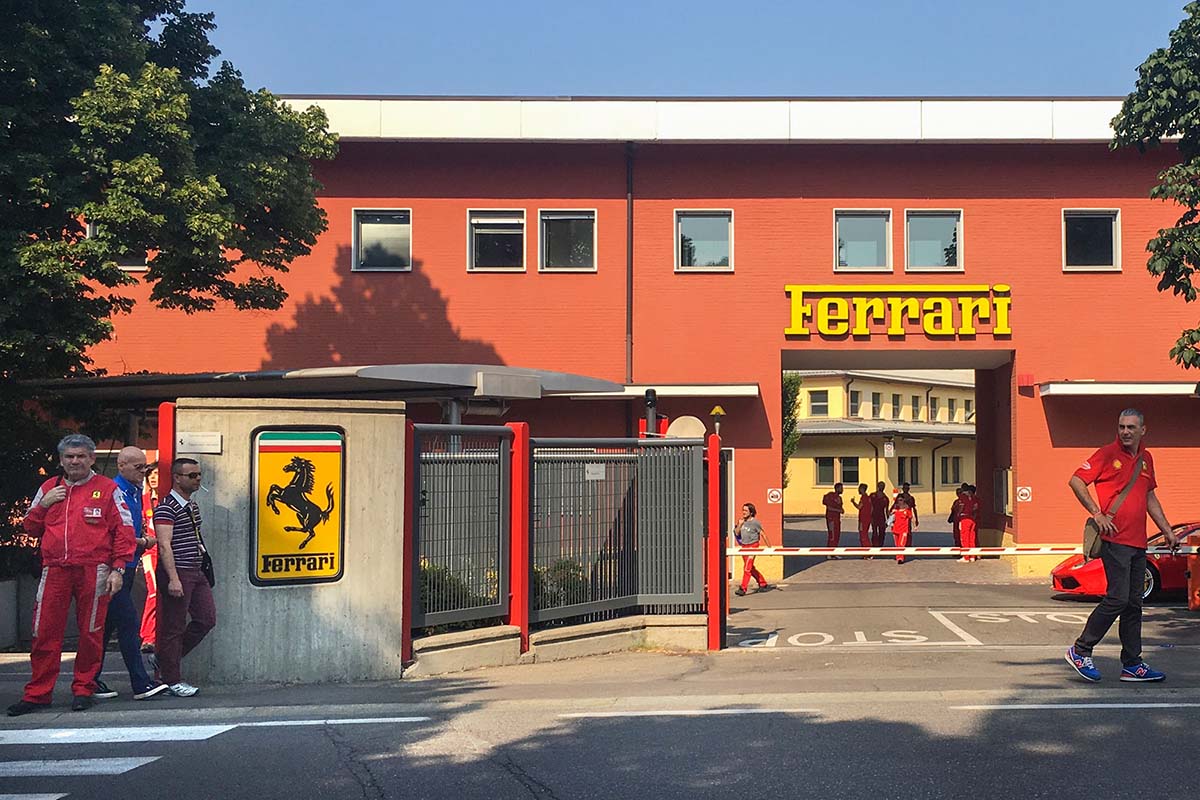 The next day, and it was time to say a heartfelt goodbye to Lake Como. The small winding roads began to gradually widen as the procession descended towards Milan. After the skilled restraint required on the mountainous hairpins - winding through valleys and cliff-edge bends, it was time to let loose once more on the broad, direct roads of northern Italy. At service station pit-stops and through the many villages loosely following the Autostrade, the locals’ love for Ferrari was evident.

The sun was blazing as the tour traversed the acres of vineyards surrounding Modena: cultivating the Trebbiano and Lambrusco grapes that would one day be made into the region’s famous Balsamic Vinegars. By early afternoon, we reached Maranello. Here and there unassuming lanes intersected with roads of new and fresh tarmac, revealing the hidden routes still used by Ferrari to road test the latest models. Here and there, with cameras and picnics, enthusiasts sat by these roadsides, hoping to catch a glimpse of a disguised prototype out on a road test.

At a family pizzeria in Maranello town center we stopped for lunch, and enjoyed conversation with locals who relished the chance to show their passion for their home’s most famous export, while all around hung Ferrari parts and components: antiques accumulated over the years from the production line next door. Having checked in at the hotel we soon set out again on foot in the direction of the Ferrari HQ.  As it approached early evening, crowds of employees, all in matching red overalls, began to pour out of every entrance in sight, until the iconic colours filled the streets, the shops, and the bars. Returning to the hotel, and having enjoyed some fantastic traditional Italian cuisine complete with copious servings of the regional Parmigiano-Reggiano, thoughts turned to the next day. 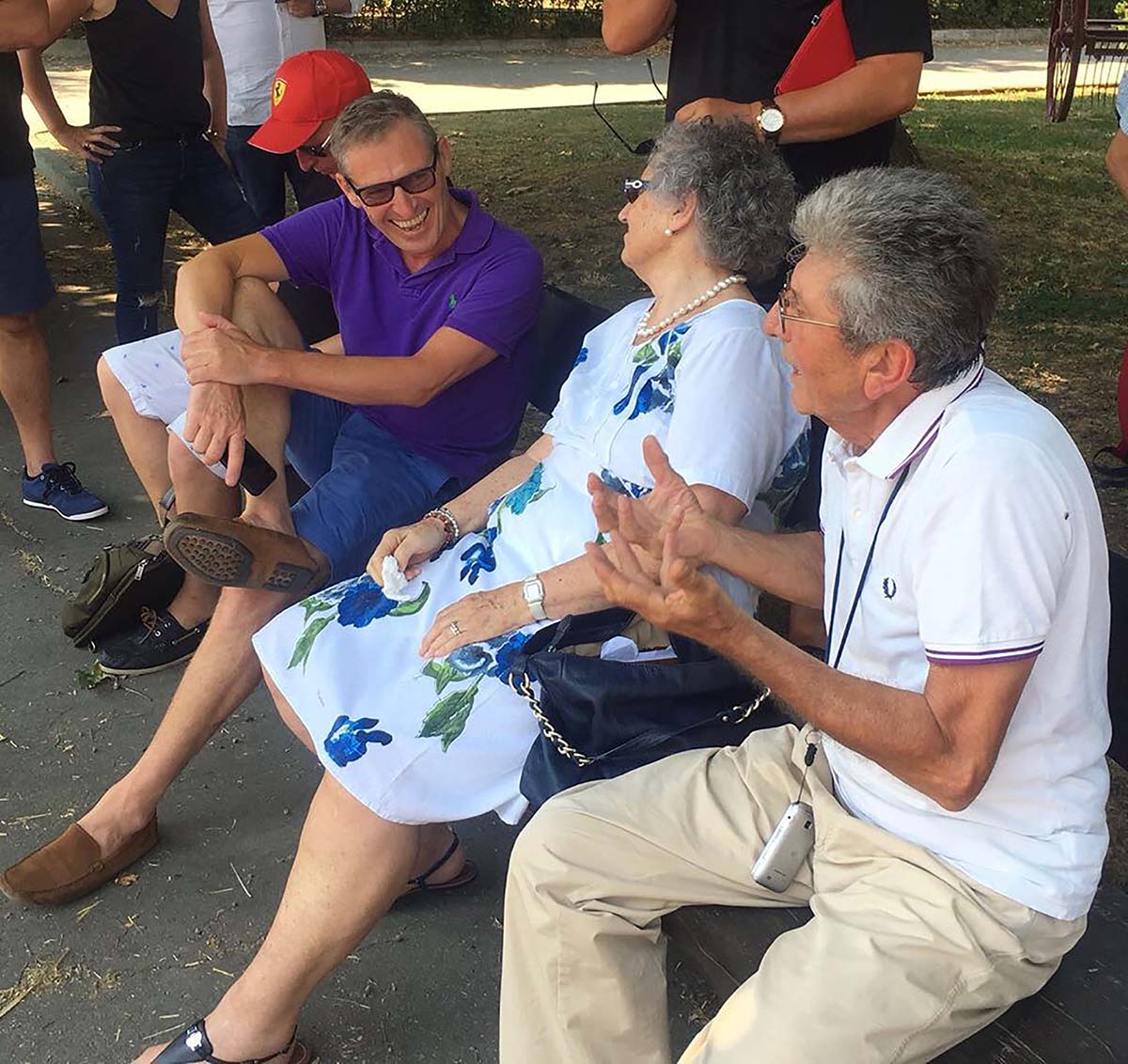 Our personal guide for the day was close friend of Foskers, Brenda Vernor: secretary, translator, and friend of Enzo Ferrari himself for 20 years. Still a well-known local figure, between visits to several museums and places of interest, Brenda regaled us with anecdotes from decades of working in the heart of Ferrari alongside Enzo, as well as renowned Designers and Drivers of the time: Mike Parks and Schumacher.

Though Ferrari could be seen everywhere from shops to roadsides, the sight of our red procession still enchanted the locals, who stood at every roadside waving us by on our short journey to Maranello’s Ferrari Museum. Inside we found air conditioning blasting, heaps of Italian cuisine, and an incredible selection of some of the most rare and iconic Ferrari. As some of the group gravitated towards the modern models: the striking LaFerrari and the audacious Pininfarina-designed Enzo, others orbited the older classics: the menacing F40, and the angular 288 GTO. For our guide Brenda Vernor, who had seen the journey from concept to reality of many of these vehicles, the favourite was undoubtedly the exceptional 275 GTB.

Our next destination was a small and quiet stretch of industrial units on the outskirts of the town. Greeted by a sleepy terrier, we were led into one of the warehouses by our guide, where we were warmly welcomed by the Brandoli Family, whose workshop houses many of the original wireframes for various Ferrari marques, salvaged decades ago from the demolition of the Scaglietti Factory.

It was to our great surprise, therefore, that our next stop on the tour of Modena crossed paths with Oscar Scaglietti, son of the renowned Design factory’s founder, Sergio Scaglietti. It was this family business that was behind some of the most iconic Ferrari designs, including the 250 Testa Rossa, the 500 Mondial, and the coveted 250 GTO. Taking shelter from the sun, it was a pleasure to witness the old friends- Brenda Verno and Oscar Scaglietti- as they reminisced about their younger days in the Ferrari inner-circle.

As the day drew to a close, our guide and host led the group to an unassuming family-run restaurant. Between courses of the finest Italian dishes, we were afforded further glimpses into the day-to-day life of Enzo Ferrari, and the institution that bore his name. It was to be difficult parting with Maranello as we prepared for the next day’s home-stretch to Monaco. 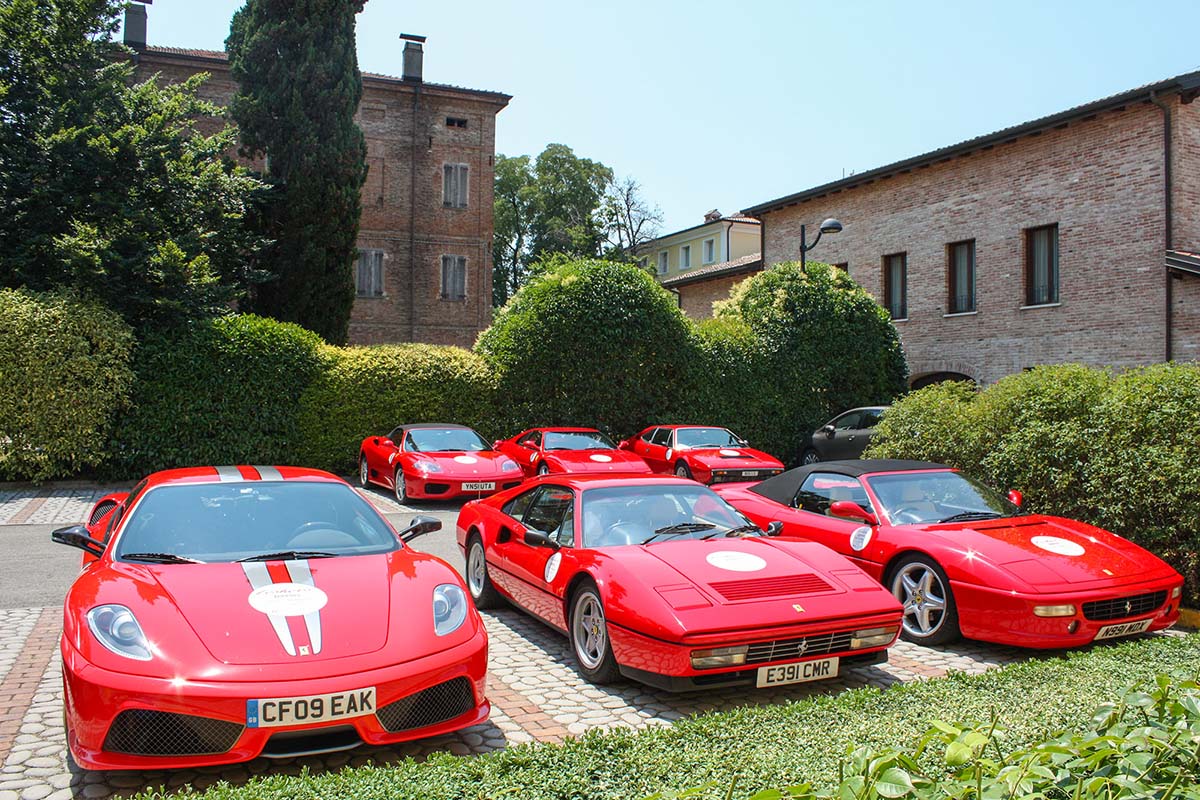 The heat was already intensifying as we said farewell to Italy, Modena, and Maranello- the home of Ferrari, and though it was sad to leave, the coastal roads and cool sea-breezes beckoned us towards Monaco. With a fresh passion for the cars that had carried us this far, the journey went quickly. Taking the scenic route through Genoa, the procession swept through Menton, cruised across the border into France, and was suddenly greeted by the Luxurious Monte Carlo glistening below.

A brief stop at the hotel, and everyone was eager to hit the town. Having been kindly invited into the Prestigious Monaco Yacht Club, drinks were enjoyed overlooking the port, which was brimming with yachts from all corners of the globe. New friends were made at the clubhouse, as stories were told of the past week’s adventures, and plans were excitedly drawn up for next year’s trip. As the sun began to set, a visit to the renowned Monte Carlo Casino was on everyone’s mind, and as some retired to enjoy an evening at the hotel, others set off to test their luck at the table.

The next day saw the group disband, but not before an afternoon just down the coast in Èze-sur-Mer’s unique Anjuna Beach restaurant, enjoying the freshest seafood and the party atmosphere of a live band. With sadness after what had undoubtedly been a superb tour but with the promise of lasting memories, we said farewell for the time being: to the Ferrari that had brought us this far, to the South of France, and to each other.